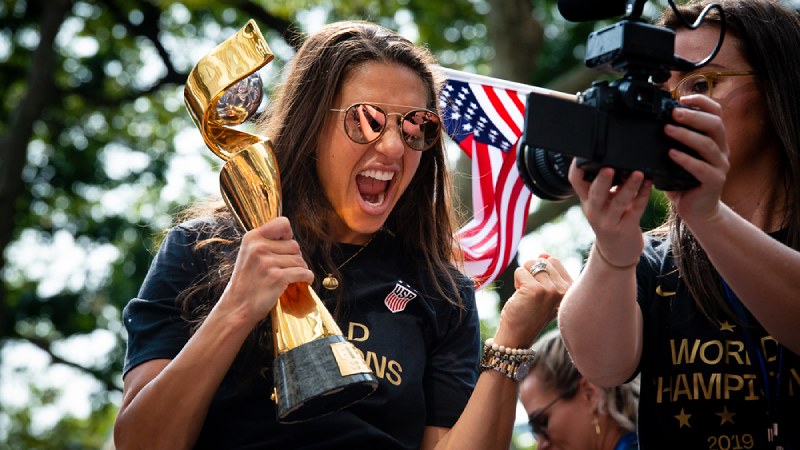 These motivational soccer videos will get you ready to go all out at training today. The videos below include commercials from US Soccer, Nike, Adidas, and Gatorade. Find your motivation.

US Soccer created this video in 2019 to highlight the US Women’s National Team. It features every player on the team, including Alyssa Naeher, Ali Krieger, Crystal Dunn, Julie Ertz, Carli Lloyd, Megan Rapinoe, Christen Press, Tobin Heath, and Alex Morgan.

The 2019 Women’s World Cup champions! Can’t get enough of the USWNT? Check out the next video from Nike.

Nike created this video for the 2015 FIFA Women’s World Cup. The music soundtrack is “American Woman” by The Guess Who.

This video features a few members of the 2015 US Women’s National Team like Alex Morgan, Megan Rapinoe, Abby Wambach, and Christen Press.

Adidas: Creativity Gets You Noticed

Adidas created this video in 2017. The music soundtrack is “Whatever I Want” by Sterling Hayes.

It starts with a group of young guys sneaking their way into the Real Madrid stadium late at night. In real life, these guys are players for Tango Squad FC, a club that Adidas created by selecting some of the best street soccer players from all over Europe.

In the ad, they run under a barrier arm, get into the stadium, and find the switches to turn on the field lights. All while making faces in the security cameras and stealing a golf cart along the way.

The field is theirs to show off their skills. At least for a little while, until the security guards arrive.

He smiles when one of the young players looks straight into the security camera and gestures, “call me.”

Nike created this video for the 2019 FIFA Women’s World Cup. Makena Cook is 10 years old, and her team is about to walk out on the field before a World Cup game in front of all the fans. She is nervous.

She is paired up with one of the pro players as they get ready to walk out of the tunnel. That pro is Lieke Martens from the Netherlands.

“Hey, you ready?” Martens asks as she grabs Cook by the hand.

They walk out on to the field together. Flashing cameras, yelling fans, stadium lights, Cook is still nervous.

They stand together for the pregame ceremony. As the Dutch national anthem finishes playing, the kids leave the field so the game can begin.

But as Cook starts to run off of the field, Martens unexpectedly grabs her by the hand again. “You’re not done,” Martens tells her as the game begins.

Cook gets pulled into a wild ride as many other FIFA stars start to show up in this commercial. Brazil’s Andressa Alves, USA’s Crystal Dunn, and Australia’s Sam Kerr also make appearances.

The commercial takes a young soccer player on a once in a lifetime journey where she gets to dance in the team locker room, do a professional photoshoot, help coach FC Barcelona, and more.

By the end, Cook’s nervousness is gone. She is ready to go, feeling confident and excited.

Have you ever dreamed of being Cristiano Ronaldo? This video from Nike proves that it would be just as awesome as you imagined.

The video begins with Ronaldo sprinting full speed to get a cross for a goal. Of course, he gets it, but his momentum is too much and carries him over the wall into the first row of fans.

He collides with young boy in the crowd, and they are both feeling a bit dazed and confused.

When they each wake up the following morning, they realize that it wasn’t just a feeling. They have switched bodies.

Cristiano Ronaldo is now a young boy that has to prove himself all over again.

The boy is now Cristiano Ronaldo, instantly a rich and famous soccer star. Unfortunately, he didn’t inherit Ronaldo’s talent on the field. The boy must also work hard and prove himself.

It sets of a funny chain of events including some expensive damage to Ronaldo’s beautiful Pagani sports car.

Gatorade made this motivational soccer video featuring Lionel Messi. It begins, “They say Messi doesn’t talk much. They’re wrong. He’s been preaching to us all along.”

What has he been saying? “Don’t go down!”

It is a short video to inspire you to keep fighting, and never give up. “Because life has more in store for you…if you just stay up.”

We are a participant in the Amazon Services LLC Associates Program, an affiliate advertising program designed to provide a means for us to earn fees by linking to Amazon.com and affiliated sites.